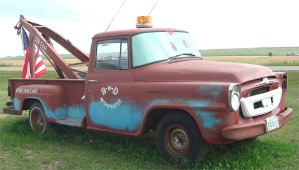 I have a neighbor that reminds me of the Tow Mater character in the movie “Cars.” Now, if computer animated anthropomorphic automobiles aren’t your thing, “Mater” is a well-intentioned, but socially-inept and poorly maintained rusted-out heap of a tow truck. He’s a little simple, not very bright, but loyal to his friends and is always of the best intentions. And that is my neighbor.

Mater has a knack for making mistakes – he wants to follow the rules, but sometimes life gets a little too complicated for him, so he keeps it simple. He just kind of makes his living helping other cars out of their messes as the proprietor of “Tow Mater Towing and Salvage,” and it seems kind of difficult for anyone to stay too angry with him for too long – he’s often misunderstood, even though he’s acting with the best of intentions. He does the best he can with what he’s got.

This is my neighbor. He makes a living doing odd jobs, “landscaping,” and doing residential “clean outs.” He finds some interesting things doing these jobs – often expounding on these finds to anyone who asks him how it’s going for him, and is more likely than not to offer to share his bounty. He will listen when you talk, and will try to make sense and draw connections to his own experiences – even though you may get the sense he doesn’t fully “get” what you’re saying to him. He does his best to make connections, to put people and things together – more often than not, awkwardly, but he cares enough to make those connections.

Here is this genuine, thoughtful man – he’s more than a little “odd,” but he seems to me to be one of the most genuine and caring people I know. He wants more than anything to make people happy – and the funny thing is, this guy always seems happy. He walks down to the bus stop with his daughter every morning and every morning they’re actively engaged in conversation, playing games together. In thinking back, I cannot think of one time he has ever had anything negative to say about any situation or anyone. Everything in his life is an opportunity. He doesn’t have very much, he lives with his mother, and yet he seems perfectly happy in his life. One gets the sense that not a lot of people make time for this man, yet if they did, they might discover a little something.

We have this tendency to get so wrapped up in the pursuit of “life,” whatever that may be – making the sales quota, hitting that ROI, turning a profit; commuting to work, navigating the office politics, getting that email out on time; coordinating sports schedules, food shopping, balancing the check book…”winning.” And after all of that, there’s no time to read a book or enjoyment in that Sunday drive. We don’t make the time to see junior off to the bus stop. Meanwhile, our children grow up without us noticing and “life happens” while we’re too busy making other plans.

“Tow Neighbor” might just have the right perspective on things. EVERYONE can teach you something, even if they don’t know they’re teaching you.