I came,  I attempted something I wasn’t sure I could complete, and…I didn’t.

The Fat Ass 50K was certainly going to be a challenge – I’d never actually run more than a little more than 13 miles in one block, and I gave myself about 24-hours to prepare – but hell one of my goals this year is to attempt 5 things I’m not sure I can complete.  And Lo.

Now, not completing the challenge wasn’t a direct result of being unsure I could.  I feel good that it wasn’t about defining my success too easily – we got 18 miles in.  A new high water mark for me, and I feel like I earned that high water mark.  I feel good that it wasn’t about giving myself an excuse not to complete it – “I didn’t think I could and see?”  I was ready to crawl the rest of the distance if I had to. 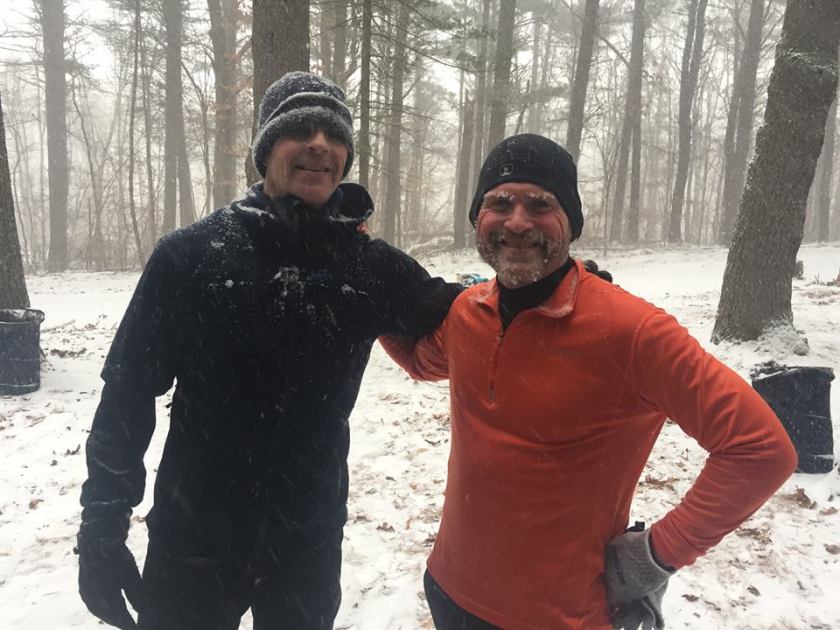 My race buddy – someone whom I admire and respect immensely – convinced me to pull the plug.  I spent the better part of the last 3 miles walking for longer periods of time, dealing with knee pain.  It also just so happened to start snowing at the end of our first 6-mile loop and by the time we got to Mile 18, it was coming down pretty good – unbeknownst to us (although, as native and lifelong New Englanders we “knew”), the roads home were going to be brutal.  The trails were quickly becoming overly hazardous for running.  It was something like 19-degrees.

Now, do I have an excuse?  Sure, I have plenty.  Fact is, though, the race wasn’t finished.  It wasn’t finished for a bunch of reasons. Were it just my knees, I would’ve pushed; were it just the weather, I would’ve pushed.  But it wasn’t.  It was a 50-mile drive home in white-out conditions, it was the increasing possibility of serious injury on the trail.   Here’s one really important take away from my first completed goal of the year: when you make the decision to quit, it means other things are more important.

The reality that I would have finished last – I mean like dead last by a LOT – wasn’t a factor.  It wasn’t important enough to me not to finish last that I quit.  I WANTED to finish; hell I was all set to crawl my way if I had to.  This race was for my dad, after all. What was a factor, though, is that if we were dead last, we would have been the only people in the park and the possibility of getting stuck would be vastly increased.  So, uncharacteristically, Rich was the one arguing the better course to chart was to quit.

So, there’s only one thing I could’ve changed yesterday: my own ability.  Had I been better conditioned, we would’ve been faster, and therefore would have been better positioned to finish.

Next time, I plan to have all those variables lining up in a way that makes it more probable than not that I will finish.  My plan this year is to set goals without worrying about whether or not I know I can succeed, Sine metu ad metam.  This was the embodiment of that.